HAVOC is a student designed and developed Hybrid rocket under PSP Hybrids. HAVOC’s mission is to compete/conform to the FAR 1030 standards and launch to 10,000 feet with a 2.2 lb engineering payload. PSP Hybrids as a whole also puts a major emphasis on training and educating members in the science and engineering behind rockets through training sessions and a library of well documented resources.

The goal of the Ground Systems team is to build a fully integrated launch pad assembly that can load liquid nitrous oxide into the vehicle without any direct human contact. Members of the team will be able monitor and control the filling process from a safe distance without ever approaching the vehicle, which  ensures that no member of the team is ever at risk of injury. Since we will be launching from a remote location, our ground infrastructure must also be rugged, self-contained, and able to provide its own power and communications systems.

Our control system will also be capable of collecting pressure and temperature data from the flight tank and combustion chamber, thus will be used to acquire performance data during static hotfire testing.

The propulsion team is responsible for designing and testing the Nozzle, Fuel Grain / Combustion Chamber, Injector, and Run Tank. After doing much of the initial sizing estimates, a lot of work has gone into getting valid models for expected mass flow and thrust curves, and the expected thermal loads. We currently have a lower bound for the mass flow given the effects of the flow being two-phase, which we then used to determine the size and number of injector holes as well as the pressure of system components. From there, we optimized the geometry of the fuel grain port(s) and the nozzle curve to create a thrust curve that reaches the desired height and velocity off of the launch rail.

We are working on moving into the testing phase with the goal of determining the injector discharge coefficient, validating the regression rate of N2O and Paraffin, and finally the thrust curve of our engine. 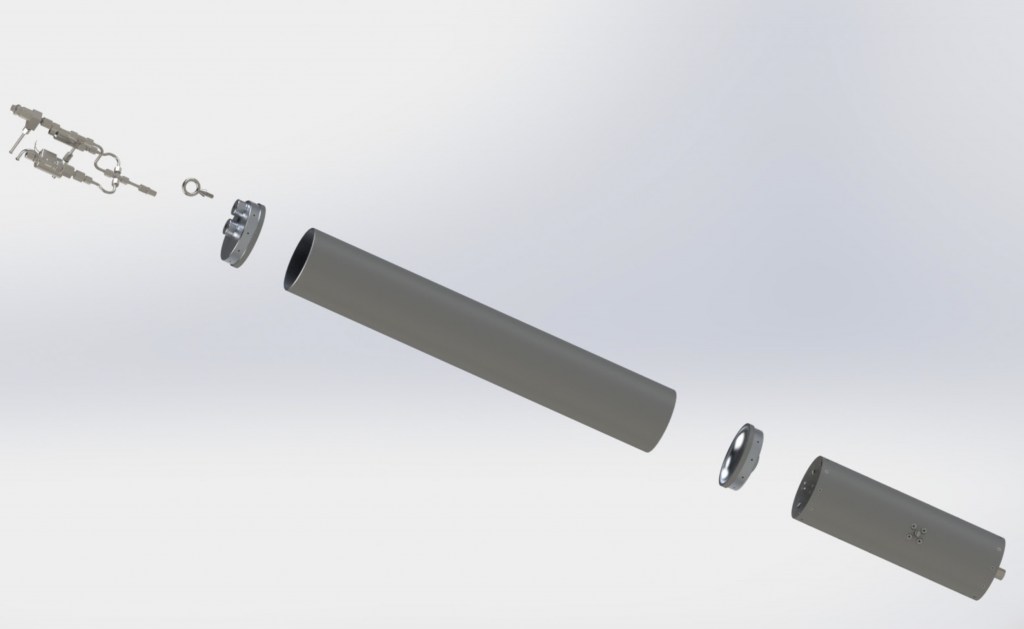 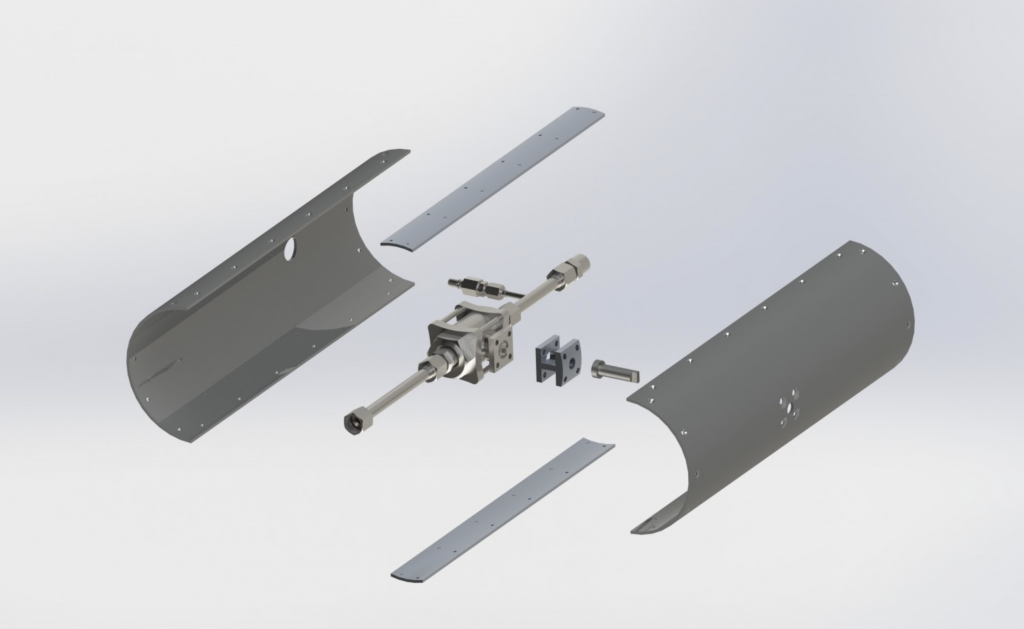 The avionics team is responsible for flight, parachute, and recovery systems. Flight systems include flight computers such as a Telemetrum and a Stratologger in order to deploy echarges to ignite black powder charges. These charges are responsible for deploying the parachute to land our rocket safely, also known as the deployment system. The recovery system is for tracking the rocket during flight and being able to find it after we touch down. This system includes components such as a Yagi antenna and a BigRedBee. The avionics team is also responsible for providing power for these components for everything to run properly. We are also responsible for providing an anchoring position for the parachute, both the drogue and the main parachutes. We will also include a number of sensors so we can follow the performance of the rocket through the different stages of flight for feedback and improvement upon iterations. 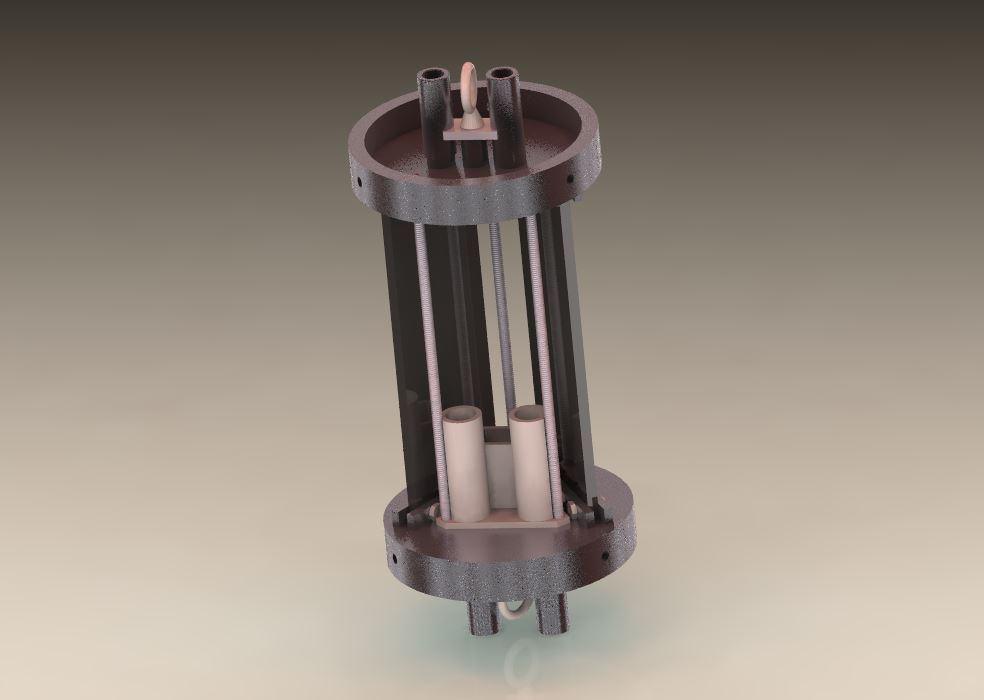 Rendering of the Avionics Bay 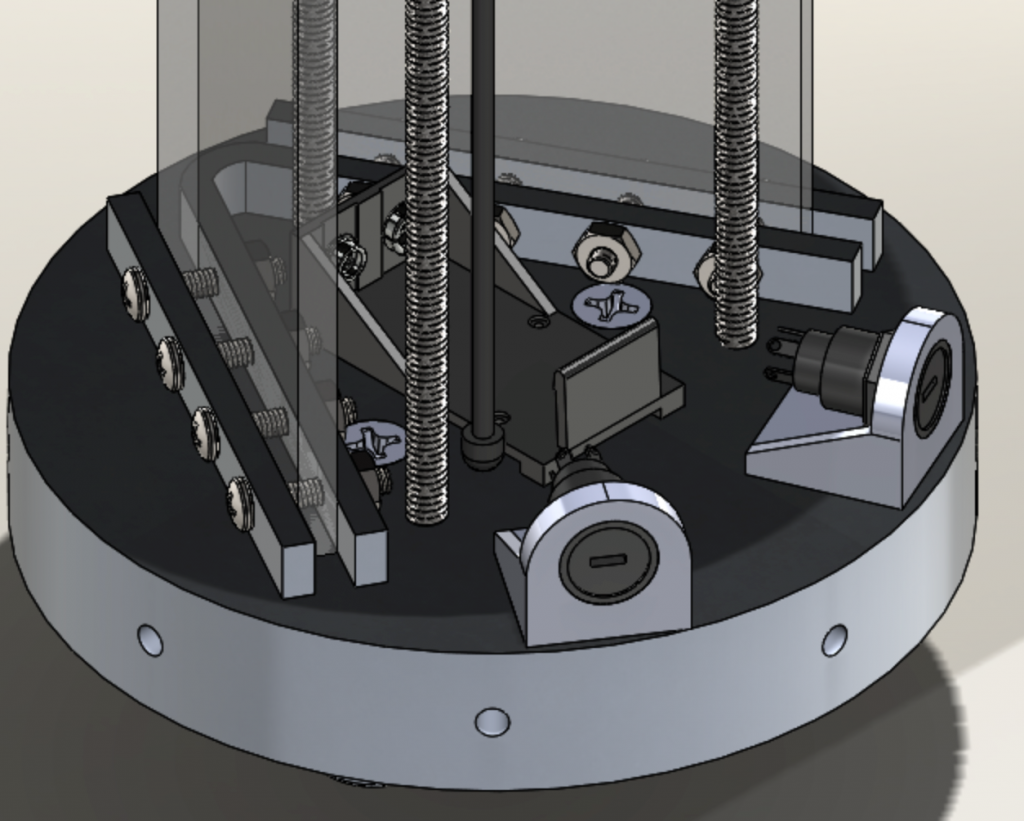 The bottom bulk plate of the Avionics Bay. This shows the “on-off” (slot switches) for the electrical components. 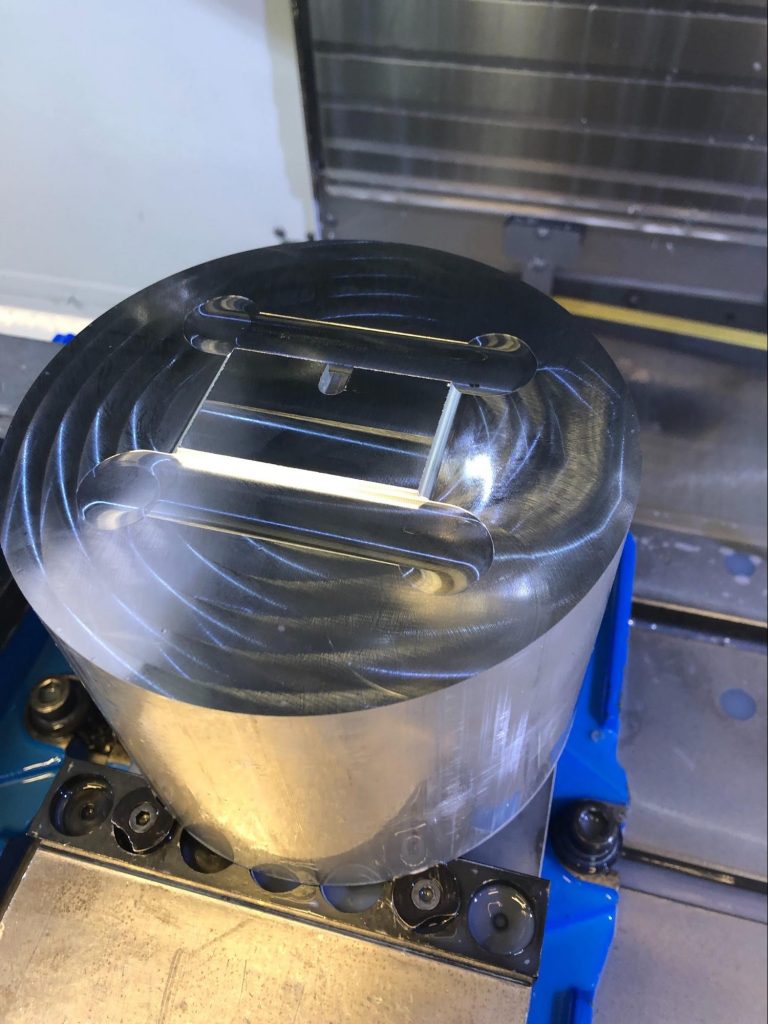 This is the beginning manufacturing of the top bulk plate of the Avionics Bay. A dovetail was cut into the stock to provide workholding for the first operation of machining.

The structures team is responsible for ensuring that the rocket will uphold its structural integrity during rocket operation. This means designing the physical structure of the rocket alongside creating structural components to stabilize each subsystem  of the rocket. We consider the aerodynamic profile desired and structure required to hold the engine, fuel system, avionics, and payload. Essentially this entails that the rocket is designed for an ultimate safety factor that covers inadvertent In‐Service Loads greater than the design limit, structural deflections above limit load that could compromise vehicle structural integrity, and accounting for as‐built part thickness within tolerance but less than that assumed in the stress analysis. We perform FEA (Finite Element Analysis) simulations and other empirical calculations to ensure that the rocket can sustain the loads it will experience during it’s flight. Alongside structures analysis the team is also responsible for handling the integration from all other subsystems to create a final assembly in CAD of the Hybrid Rocket.

The payload subteam is responsible for, well, the design, construction, and testing of the payload and its associated structures. The current payload is built to satisfy the following challenges from the FAR 1030 competition:

These tasks are accomplished by a rover that has a combination of remote and autonomous controls. The driving controls are operated using RC with the 360 degree camera creating its panorama view with only a single button press. While the rover is still being developed, a sketch of the design can be seen below. The rest of Spring 2020 will be spent assembling the CAD of the rover, with Fall 2020 and Spring 2021 dedicated to manufacturing and testing.

An Arduino mega is used as the ‘brains’ of the rover. 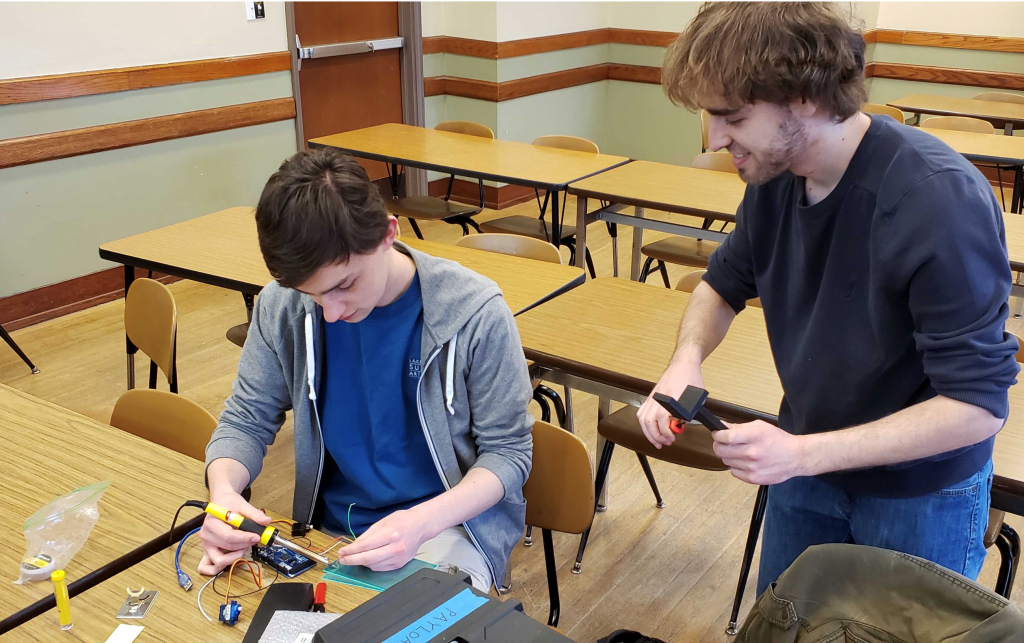 The various parts of the rover are custom-wired with team members soldering the different components together.

The aerodynamics subteam is responsible for modelling the flight and deployment of the rocket. Given the thrust curve provided by propulsion, we attempt to model the maximum aerodynamic forces on the rocket, the drift, horizontal velocity at apogee, apogee and deployment forces of the dual-deployment system. We ensure that the rocket is stable throughout its entire flight despite any wind conditions and attempt to optimize apogee in any way possible. The team is responsible for the nose cone, fin can, fins and launch rail attachment of the rocket. We use Open Rocket, and many academic and military papers on aerodynamics to model our own trajectory code, wind tunnel tests and CFD (computational fluid dynamics) to attempt to attain the best possible model of the rocket possible. The FAR competition has a one point deduction for every foot of altitude off target (10,000 feet), and widely available models are at +/-10 and sometimes +/- 20% accuracy, meaning they could easily be off by 1000 points come competition time.

Manufacturing primarily takes place at the Bechtel Design and Innovation Center (BIDC) on campus. The center has a variety of manufacturing capabilities including CNC mills, lathes, and a 5-axis machine. All of the custom components that can be manufactured in-house are made by students on the team. Shown below is the first prototype of the structure that will attach the fins to the rocket. 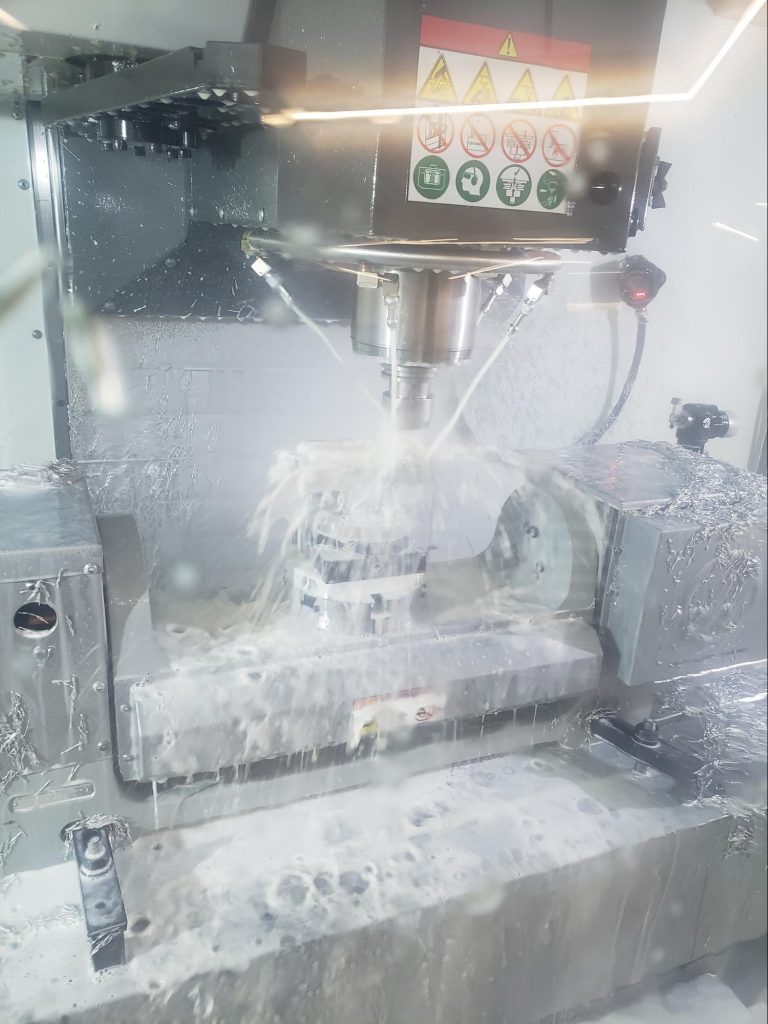 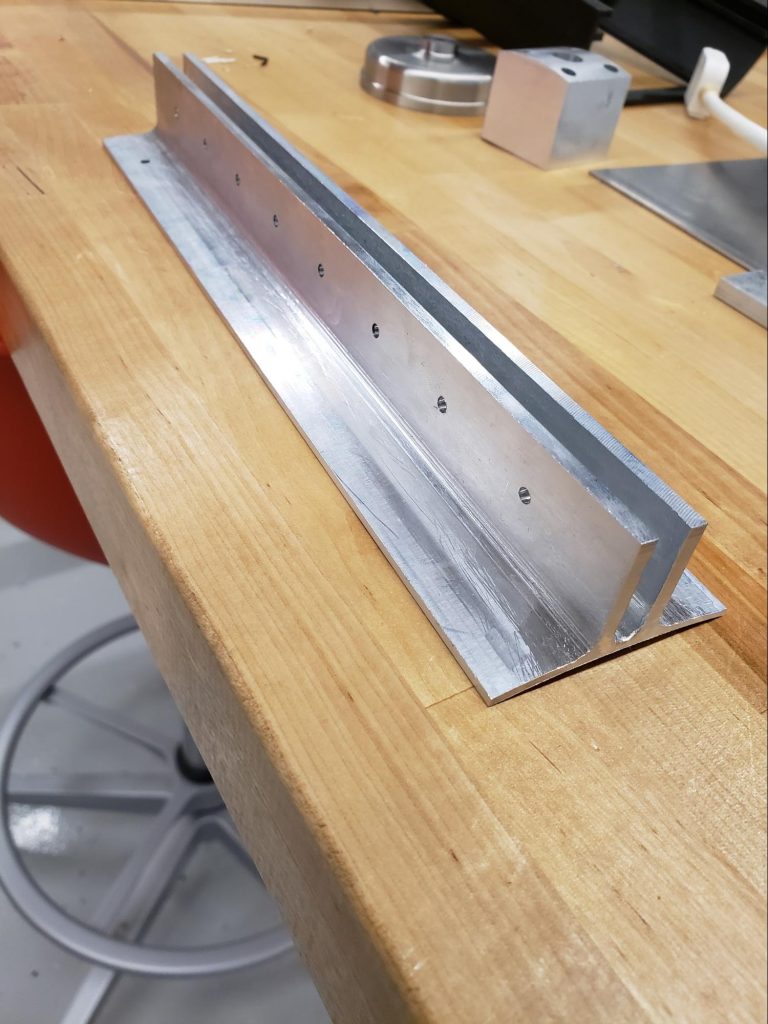 Machining is completed with the help of Computer Aided Manufacturing (CAM) software in Fusion 360. CAM allows complex toolpaths to be programmed and simulated. Shown below is the CAM that was made to machine the fin attachment.